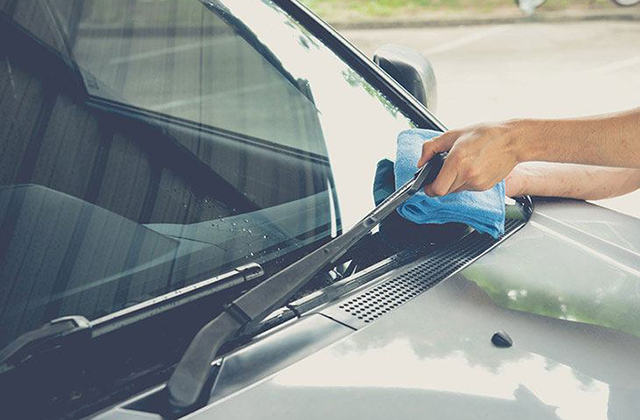 With winter setting upon us, it’s important to get any road salt off your car as soon as possible if you don’t want it turning into dust. The best way to do that is to just wash it all off, but heaven help you if you go to an car care products. We spoke to an expert to find out why.

I must say this whole article was spurred by a conversation I had with Road & Track’s Sam Smith. Sam is a beloved and dear friend, a Jalopnik alum, and a Notorious Trickster Who Should Never Be Trusted. So when I proudly posted photos of my new Lexus going through the wringer for the first time, I was utterly perplexed by his eloquent proclamation that “brushless no-paintfuck is a lie perpetrated by Big Flappywheel.”

As elucidating as Sam can be, I wasn’t really able to decipher the reasoning for his rage through all the sniffles. The carwash was brushless, the sign before the big, gaping maw of whirring machines said. All of these fears were old hat, spurred on by the myths of yesteryear. I would proudly set my Lexus into its gentle jaws, and be rid of the salty death chewing away at its metal underside. I was in the clear, so I thought.

Wrong. At least according to Paul Lamberty, who is responsible for “all automotive OEM and refinish coatings research and development within North America” for BASF, a top-tier supplier to the automotive industry.

“It’s like painting your car with a wet sandblaster,” he told me over the phone. The problem isn’t really the bristles, he noted. So it didn’t really matter whether or not my trip to the carwash was “brushless,” if it used bristles, or if it used giant floppy foamy things to gracefully slop away dirt.

The problem was all of the other cars and the stuff, or “media,” that clung to them from driving around all day. If the car before yours went on a dirt road, for instance, it would pull into the carwash just covered in mud and sand, he explained. And mud and sand are mostly made up of small bits of rock, including granite, which is extremely hard and abrasive.

That grit tends to stick onto the cleaning apparatus of the carwash, which after a while can start to almost be like sandpaper. “Some of those car washes, seriously, I’ve seen them where the brushes are gray to brown with dirt,” Lamberty said.

With the high speed of the cleaning machines and the high pressure of the water, all that dirt and grit is rubbed along the surface of your car on its way off the body. And with it, can come a little bit of your paint.

“I don’t care what car wash it is, if it rubs that media on the surface of the paint finish,” your paint can be stripped away, he said.

Eventually, your car could end up with what’s called a “spiderweb scratch,” which basically looks how it sounds.

Of course, if you’ve gone through the carwash a couple of times, all is not lost, Lamberty reassured me. I didn’t have to throw my brand-new-to-me beloved Lexus straight into a dumpster. Virtually all cars come with some level of scratch-resistant clear-coat straight from the factory, which should provide some level of protection. It’s really only a concern if you take it to a carwash repeatedly, over the course of a number of years. And if your paint is only deformed, and not stripped entirely, it’ll probably go back to normal once a little heat is applied to it, even from the sun.

And if you only plan on holding onto your car for a few years, it’s not something you’ll probably notice at all if you only go to the carwash every now and then. It’ll mostly start to look bad only after 10 years or more.

So how do you know how good the protection is on your car? Well, that’s a much tougher question to answer, Lamberty said. Just because you get a high-end car doesn’t mean the manufacturer sprang for the higher-end paint protection at the factory. And even within a model, the level of protection can vary. Lamberty specifically pointed to the Ford F-150, which has different coatings depending on whether or not it was made at Ford’s Kansas City Assembly in Missouri, or Dearborn Truck Plant, in Michigan.

“Both meet the manufacturer specification, but they’re two different coatings,” he said.

If you need to get stuff like salt off your car, just hand wash it, Lamberty said. Use a lot of water to get all the grit off your car gently first, and then maybe use a soft clay and some towels to make sure everything shines nicely.

Here’s a half-hour video you can watch if you really want to see how it’s done:

I then asked Lamberty if he’s ever taken his car to a car wash.

“And I don’t think it’s ever seen a carwash.”